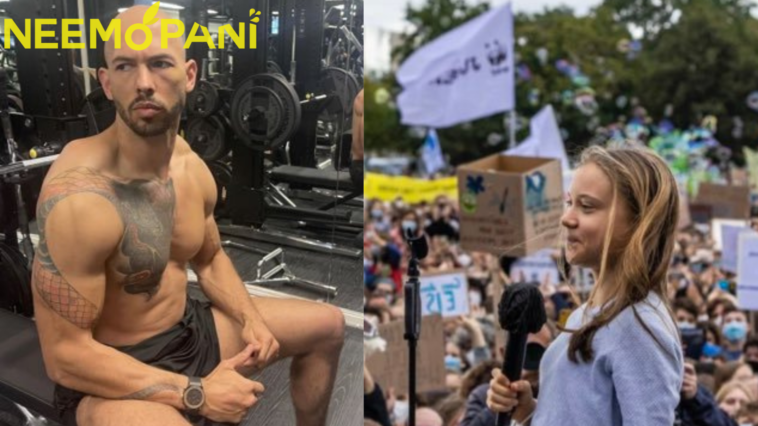 Greta Thunberg, a famed teenage climate activist, has garnered the internet’s affection once more, but for quite different reasons. She has gotten more than her fair share of online mocking and scorn for her worldwide marches and speeches encouraging youngsters and governments to action.

This is just the start.

Please provide your email address so I can send a complete list of my car collection and their respective enormous emissions. pic.twitter.com/ehhOBDQyYU

In the latest such episode, notorious media figure Andrew Tate, who is renowned for his sexist and far-right views, resorted to Twitter to allegedly jab Greta Thunberg, tagging her in a message which boasted about his collection of “33 cars” and their “enormous emissions”.

Andrew Tate is an American-British media personality and former professional kickboxer. Following his kickboxing career, he began offering paid courses and memberships through his website and later rose to fame as an online celebrity.

Andrew Tate has recently converted to Islam as well which has gathered him his lost fame.

yes, please do enlighten me. email me at [email protected] https://t.co/V8geeVvEvg

Tate’s four-syllable reply to Thunberg’s retort fell short of expectations, with the former kickboxer simply writing “How dare you?!”

Meanwhile, Twitter users swarmed the reply section to Thunberg’s tweet affirming their support for her and deriding Tate.

Greta Thunberg is a Swedish environmental activist who is known for challenging world leaders to take immediate action for climate change mitigation. Her sudden rise to world fame made her both a leader in the activist community and a target for critics, especially due to her youth. Her influence on the world stage has been described by The Guardian and other newspapers as the “Greta effect”.

Most people find flexing to be ineffective, but when you pick on someone half your age, it appears that you have serious character-building issues. Greta Thunberg is our hero, and she is the one who is speaking up against climate change.

Got anything to share about the story, let us know in the comments.

Neemopani keeping you updated with all the latest news. Subscribe to our social pages.