Pakistan and England are facing each other after 17 years. The English players have been part of the PSL which has boosted their morale and pushed their cricket board to revive cricket. They are going to play a series now in 2022 with 7 T20Is. We are excited to see both teams clashing and reviving the old memories.

Not only the players, but commentators, and coaches from England have been part of PCB.

Imran Ahmed Khan who recruited the players for the PSL from 2017 to 2021, said, “In many ways, the PSL has been a vehicle for the full return of international cricket to Pakistan. Just in terms of slowly changing perceptions across the cricketing world around being in Pakistan. So many different international stakeholders get involved in the PSL’s ecosystem: players, coaches, support staff, production crew, and commentators. They’ve all been able to experience Pakistan through the PSL and they’ve gone on to share that experience with others in their respective countries. England touring Pakistan hasn’t happened in a vacuum. It’s been a result of stakeholders gaining that experience through the PSL and being able to build that confidence around playing Pakistan.”

Players like Moeen Ali and Shan Masood, Liam Dawson and Asif Ali, Phil Salt, and Shadab Khan have been interacting with each other during the practice sessions. Seems they are catching up nicely as the team toured the city as well.

Shaun Tait has been a huge fan and supporter of Pakistan’s bowling. At the moment, he is the bowling coach of the green team. He said, “Pakistan fast bowlers have their natural abilities. They like to keep things simple but they’ve got so much ability and have a lot of flairs. So, that’s already ingrained in these guys.”

To welcome the English guests, PCB specially aired an ad, which was touching.

Our special guests have arrived in full swing! Get ready for the 𝒎𝒖𝒒𝒂𝒃𝒍𝒂 of the year 🤩

Players shared their views on Twitter regarding the series.

Moeen Ali "England Touring Pakistan Is a Historic Series. I feel Honoured To Captain England In The Country Where My Family Belongs. This Is a Proud Moment For Me and My Family As Well" 🇵🇰#PAKvsEng pic.twitter.com/3m7wI76dDS

The story of how the PSL helped pave the way for their first tour to Pakistan in 17 years #PAKvsENG https://t.co/2R1B3kXfrH

The net practice was shared by PCB 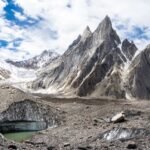