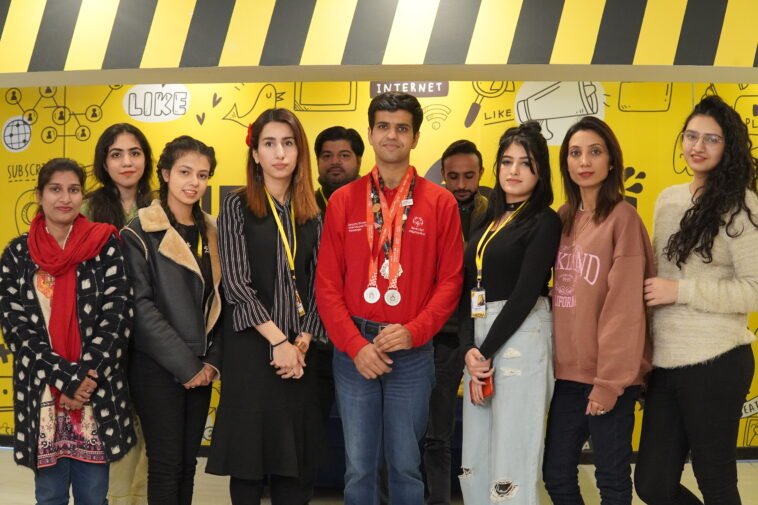 This is a story of resilience, courage, bravery, respect, and above all, LOVE with a smile. Dastak – A Documentary Series that uncovers the extraordinary lives of regular people. Dastak’s purpose is to showcase the greatness among the mediocrity of our daily lives. We want to provide them with a medium to tell the stories of their resilience and courage.

We invited the Abbasi family and were awe-inspired with them. When they left, we, too, were left tear-eyed. The tears were not because of the family’s circumstances but because of the courage they have shown in the face of all that life and the people around them have thrown their way.

We would like to thank the Abbasi family for being our guest. For inspiring us and teaching us that life can really be lived simply only if people choose to.

There are four members in the family, but what they have managed to achieve is more than most families can. The family members are Hasseb Abbasi, a 22-year-old Special Olympics Gold medal winner; Hashim Abbasi, a 22-year-old boy who is non-verbal; Atta Ullah Abbasi, the father of these beautiful sons; and Lubna Nawaz, one of the strongest women we’ve ever met.

‘Hello Friends,’ Haseeb began his story and told us that he, until the age of 8 years, was unable to speak. He struggled to communicate with his parents and others around him. He often felt left out and had no friends.

In his own words, Haseeb told us, ‘Everyone was talking about me, and not to me.’ This is how he felt in school and the other places that he went to. To cope in social gatherings, Haseeb tried to mimic his favorite cartoon character, Jhonny Bravo. In doing so, he was often labeled as retarted and mad.

In the face of this adversity, he did not let himself be stopped. He knew that he had a passion and dreams that he wanted to fulfill, and he tried his best. He went for the Special Olympics Asia Pacific Regional Games and won two Gold Medals in Cycling.

Over the years, Haseeb has come a long way, but no one can deny the fact that his life has been nothing short of challenging. More complex than most of us can even imagine.

Haseeb did point out that it was the people around him that made him uncomfortable. They excluded him from everything and made him feel like he did not belong. However, when we sat there recording his video, we saw that he was just another human being, much like the rest of us.

His mother, during the video, asked him, ‘Haseeb, do you hate anyone?’ And he instantly replied “NO” because in his mind, the opposite of hate is love, and love comes with a smile.

In the end, Haseeb is like all of us, as we are like him. He took care of his younger brother, who could not speak. He talked to us, smiled with us, and had a good time. All he wants is to be included and feel respect.

If you want to know more about Haseeb or want a glimpse of that sunshine, head out to DHA 2, Islamabad, where Haseeb is the CEO of ‘Squeezy – the Juice Bar.’

Haseeb’s story is no doubt inspiring, and we at Neemopani feel that sense of pride of having met a man like Haseeb, called in his father. And in the end, we were left with questions in our minds. How do we treat others? As part of our society, do we make the intellectually disabled feel inclusive?

Atta Ullah Abbasi, the father of Haseeb, was diagnosed with Vocal Cord cancer some years ago. The doctors had given up on him after removing his vocal cords. But this member of the Ironclad family knew that he had to fight for his family, and he did.

He told us instances when he felt unfortunate at the behavior of others towards his sons. He told us how people often made fun of Hashim and Haseeb in his words.

Hearing his story, we were left thinking of our way of dealing with others. Consciously or unconsciously, we too mistreat others at times, not understanding the effect our words and behaviors can have on them. 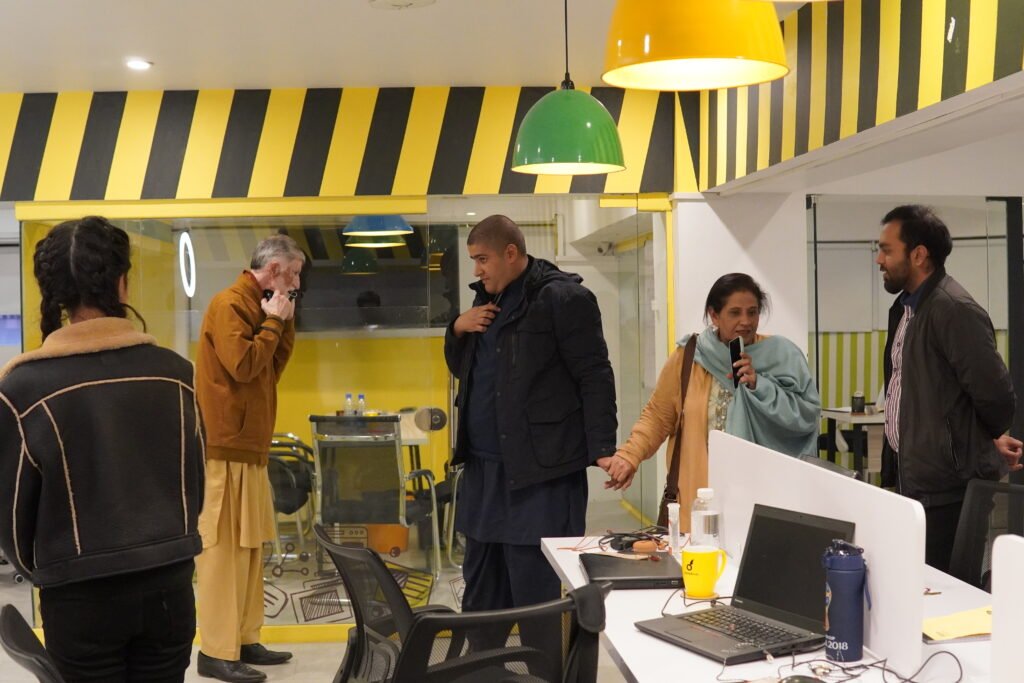 In another instance, he told us how sad things have been for him. The device that he uses to communicate is not found in Pakistan, and he has to have it shipped from the USA. While the device’s price is 1 Lakh, 27 thousand PKR, he has to give three times duty tax. 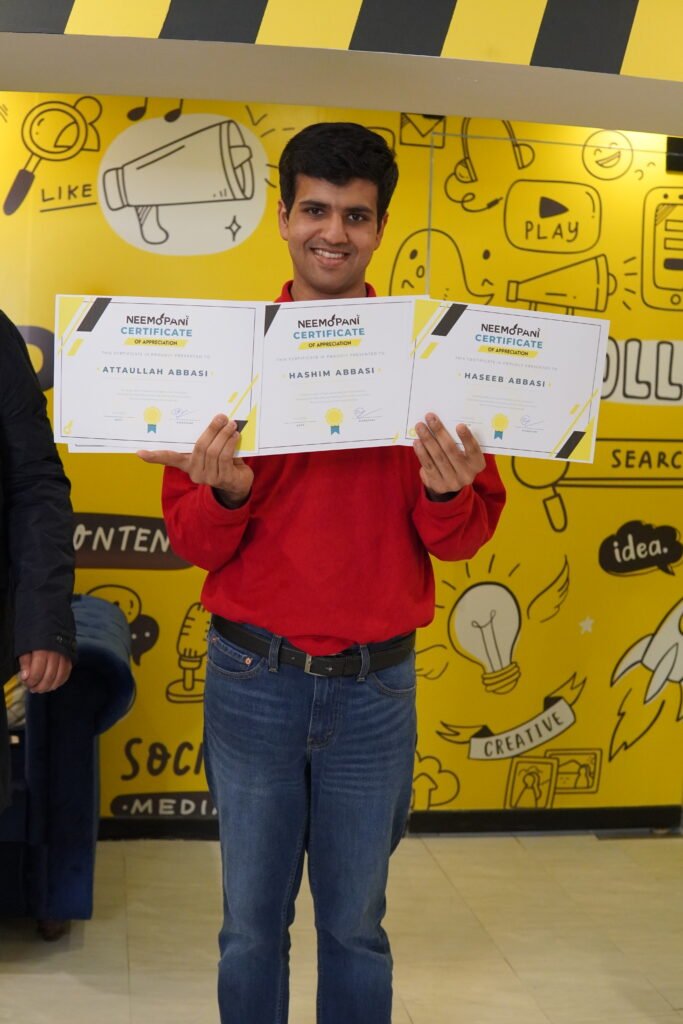 But the story does not stop here. We then asked Lubna Aunty to tell us her story.

But what this iron woman wants more than anything else is to make sure that their children are taken care of for the rest of their long, prosperous, and successful lives. Lubna Aunty wants the world to accept people with intellectual disabilities. She wants his son to earn for his own merit rather than receive charity. And in the end, it falls on us to provide people with disabilities with opportunities where they can shine.

Words cannot describe how brave she is, with all that life has thrown her way. She continued to smile, but the hunch of her back indicated how tired she was, not of taking care of her family, but of the behavior and ignorance of the people around her.

The story ends here. Abrupt as it is, we have to stop it and wait for these fantastic human beings to achieve greatness in their lives.

But before we end, we ask our question again. How will you change yourself? For our part, we will take the initiative to learn ASL – American Sign Language. This is a small step that should have been taken years ago.

Because at the end of the day, people will disabilities all have hurdles, and most of them are because of communication barriers. In knowing ASL, we can tell people that we respect them, admire them, and want them to continue to do greatness!

It falls on all of us to actively try to make such people feel included in our societies, because no matter what, everyone is born equal. We all have the same rights. And it is up to each and every one of us to give the other those rights.

And in the end, lets all remember the word – Compassion; the word to live by. 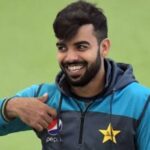 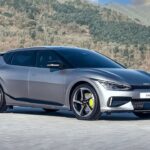