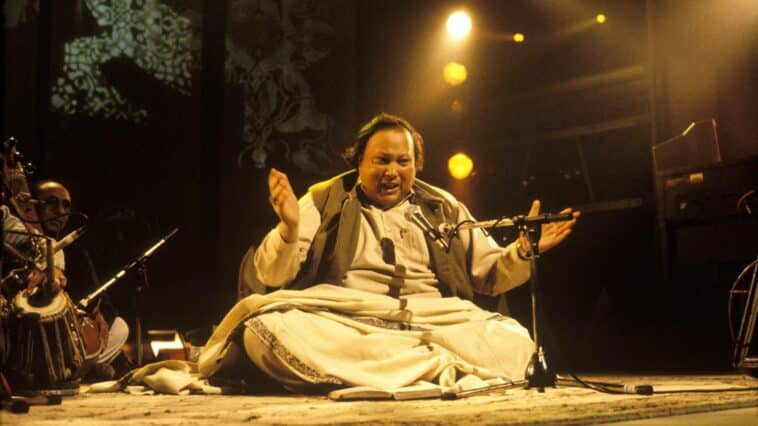 Subcontinental and eastern music has different sounds and flavors that it has introduced to the world.  The tradition of Qawwali has not been restricted to religious gatherings or festivals, rather it has captured the hearts of the west with its unique form and message of love and peace.  Pakistan has produced famous talented people that need no introduction. Shahanshah -e- Qawwali or the Qawwali Maestro from subcontinent Nusrat Fateh Ali Khan has been the key member to bring Qawwali to the world. Nusrat Fateh Ali Khan’s legacy has enraptured millions across the globe with his magnificent and haunting voice.  On his 25th anniversary, Neemopani pays a tribute to his services in music.

Nusrat Fateh Ali khan’s family came from Ghazni, Afghanistan to the subcontinent where they settled in Jhalandar, Indian Punjab. After Partition, his family settled in Faisalabad. His family carried a legacy of Qawwali for the last three centuries.

His grandfather Maula Bakhsh Khan was a trained classical singer who used sitar, sarod, violin, table, and the harmonium. He was well versed in Punjabi, Urdu, Arabic, and Persian.

His Uncle Mubarak Ali Khan and Father Fateh Ali Khan blended classical elements (khayal and dhrupad) with traditional Qawwali. They popularized the verses of Allama Iqbal in the form of Qawwali on radio, for which Iqbal paid an homage, “I was restricted to schools and colleges only. You have spread my poetry through India.”

The greatest voice in the history

He has been recognized as the greatest voice in musical history across the world. Introducing Qawwali, a form of deep religious expression entwining love and peace to the west has been on his credit. An unusual form of music unknown to the west, they were captured and delved deeply into this form where they expressed that it was a transcendence from the earthly music that has been usually part of the music scene.

He was a complete musician blessed and gifted with a powerful voice. His voice had variations with three ranges which included bass, mid-range, and high pitch. His voice could cover the range of notes of the piano. he could perform smoothly all night long without his voice cracking.

The western musicians were mesmerized by the way he presented Qawwali. They wanted to make a fusion of western music and Qawwali which proved lethal and continues to inspire generations of musicians across the world. The collaborations included:

For Jeff Buckley, Nusrat’s voice was like therapy taking him out of depression. He learned Urdu to understand the songs that Nusrat sang.

In 1985, Nusrat Fateh Ali Khan performed for the WOMAD festival, which was founded by the legendary Peter Gabriel. This was a major breakthrough for him through his mesmerizing voice which had now transcended the boundaries. The beats of the tabla along with the adrenaline rush were something that the western audience had never witnessed. An unknown language and form of music kept them spellbound and their feelings were indescribable.  With him, Qawwali was introduced to the West in its true form.

New York’s Central Park witnessed an audience of 14,000 in 1993 which was massive. Getting ecstatic in unison with the thaap of the tabla and the group enchanting showed madness and craziness never seen. Nusrat told Time magazine: “My music is a bridge between people and God.”

Peter Gabriel started the label Real World after the successful WOMAD Festival. He collaborated with Nusrat on many albums which were released posthumously. 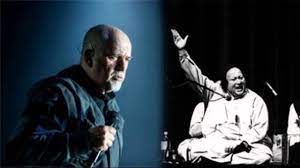 Michael Brook collaborated on two fusion albums named Mustt Mustt and Night Song. Night Song won the Grammy as well, which was an honor to the Qawwali Maestro. Nusrat Fateh Ali Khan holds a world record of producing 125 albums as a Qawwali artist in the Guinness book of world records.

He was just not loved in Hollywood but across the border. He had an impact on the subcontinental audience casting a spell on them. He was invited by Raj Kapoor to his son Rishi Kapoor’s wedding where he captured the hearts of the Bollywood stars. Nusrat also collaborated with Javed Akhtar for the album Sangam (1996). He also remained a crucial playback singer in famous Bollywood movies which included Bandit Queen (1994), Aur Pyar Ho Gya (1997), Kacche Dhaage (1999), and Kartoos (1999).  AR Rahman included his ‘Gurus of Peace’ in his album Vande Matram in 1997 to pay tribute to him. 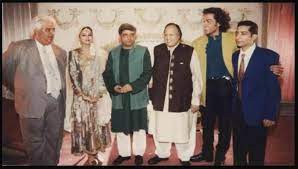 Zain Ahmed’s Journey of ‘Rastah’ And Forbes 30 Under 30

Many artists have come and gone but no other Nusrat Fateh Ali Khan will ever be born. He was, is, and will remain the Qawwali Maestro for the centuries to come.