14th August is just around the corner, and considering how the current Independence Day marks as 73rd, we at Neemopani have taken the initiative to explore some of the ancient places of Pakistan.

Pakistan is the place of culture, and has a very profound history. There is a vast number of places that beg to be unearthed, and discovered by curios researchers. Pakistani government needs to learn a lesson or two about preserving national heritage, considering there are so many jewels of Pakistan that need to be discovered and preserved.

One such jewel is Monhenjo Darho, also known as the “Mound of the Dead.” It is one of the Pakistan’s most ancient sites.

The place is an ancient Indus Valley Civilization City that thrived during the era of 2600 BC to 1900 BC. Some of the ancient artifacts that archeologists have uncovered from the Mound of the Dead give us all a glimpse into the city’s full glory during its early years. There is a birth, a rise, and then a fall of ancient cultures. Similar is the case of the ghost city that now lies in one of the regions of Sindh, its remnants ushering a tale that most of us can only guess. Given below are some of the most stunning facts about Mohenjo Darho.

The Mohenjo Darho City is one of the most advanced civilizations of the early Indus Valley. Most of us will be stunned at how developed the city was! It had its own sewage system, a well-constructed building structure using brick-to-brick layout, and a stunning bathing system that must have been quite advanced, considering the age of 2500 BC. Even now, as many current civilizations use the structural consistency of bricks while construction buildings, it really makes us wonder if Mohenjo Darho was the origin place of using bricks as foundational structures in the buildings.

The Great Bath is one of the most advanced bathing systems that Mohenjo Darho utilized. It was so well-constructed that it is still intact, and allows archeologists to peer through the ancient structures.

The pool was 12 meters long, 7 meters wide, and 2.4 meters deep. There are two staircases that lead into the pool from North and South. Archeologists have surmised that the Great Bath was used for religious purposes, as well as a place for group baths.

If you look at the picture of the Priest King’s statue, you will uncover many interesting things. The floral cloak with one arm covered looks like one of the Greek dresses, even though the ancient civilization is quite distinct from that of Greece. The lightly trimmed beard, and the headband with two ribbons hanging from behind the head allow us a glimpse into the past. We are currently calling the statue a Priest King. Many questions still arise. Was the Priest King a priest, a king or a representation of the common man in that era? 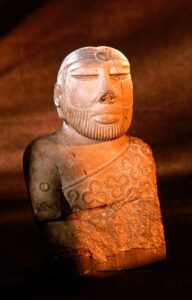 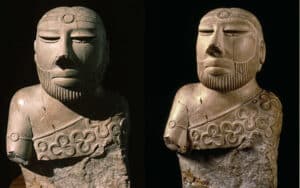 It seems that the people of ancient Harappan civilization knew the art of metal bending, an also had a knack for entertainment. The statue of dancing girl was uncovered in 1926, is an indication of that theory. Currently, the statue found its home in a museum.

If you look closely, the girl’s pose doesn’t look like a typical dancing stance. She has her right arm behind her hip, and the other one on her knee. Her left arm is covered in bangles. It might look like she is posing for something. Perhaps an initial stance before she performs her ritualistic dance?

Or maybe she is dancing as part of her worship? Considering how the ancient civilization links back to the religion of Hinduism, many conclusions can be drawn from the statue. 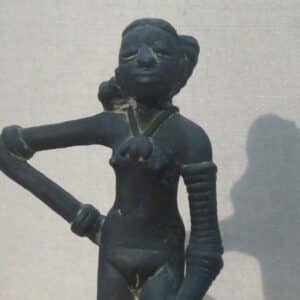 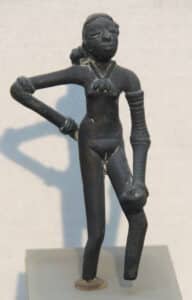 Nobody knows what caused the great collapse. However, there are only guesses. One theory suggests that the warrior clans known as Aryans came and conquered the entire Indus Valley. Their conquest lead to the capture of Monhenjo Darho.

The theory is rejected by a considerable number of researchers who state that Aryans were undergoing persecution themselves and didn’t invade Indus Valley Civilization. They migrated, and the Indus Valley’s culture underwent a blend of different cultures. The theory is very much believable considering the traces of Indus Valley culture are also found in other places. Many researchers have claimed that Mohenjo Darho simply went through a disaster (flooding) and people had to leave it behind. 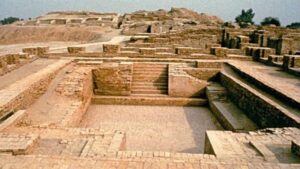 Mohenjo Darho is one of the most ancient regions in Pakistan. It was once a thriving city for almost 700 years. Under mysterious circumstances, it was abandoned, only to be unearthed years later in 1926 by British Government. Currently, its artifacts sit in museum and allow us a glimpse into the age of once hustling city that fell either due to an invasion, or a natural disaster. 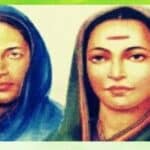