Microsoft’s employees are in for some good news. In an effort to retain staff and help people cope with inflation, Microsoft plans to “nearly double” its budget for employee salaries. This shows just how challenging it has become to keep a tech workforce intact given the larger dynamics playing out in the global economy and the job marketplace.

The software giant said in a statement that the move will mainly affect “early to mid-career employees.” With ongoing high inflation an intense talent war is also taking place. In order to keep the best employee intact to the firm, they need to step up their game. The company had 103,000 workers in the US as of last June and another 78,000 around the world. The higher cost of living is just one of several considerations for firms such as Microsoft and its rivals – all of which are faced with the challenge of filling job roles during a period of high worker leverage that has become known as the “Great Resignation.”

Inflation surged to a higher-than-expected 8.3% in April and has remained persistent for months, sapping worker wage gains and adding pressure to household budgets. Cost of rent, groceries and major staples of life are constantly on the rise putting pressure on firms to retain employees and not lose them to their rival companies.

Microsoft’s salary package is composed of base salary, bonus and stock. The changes will apply to a substantial part of the company’s workforce, which stood at 181,000 as of June 30, 2021. 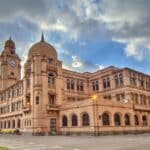