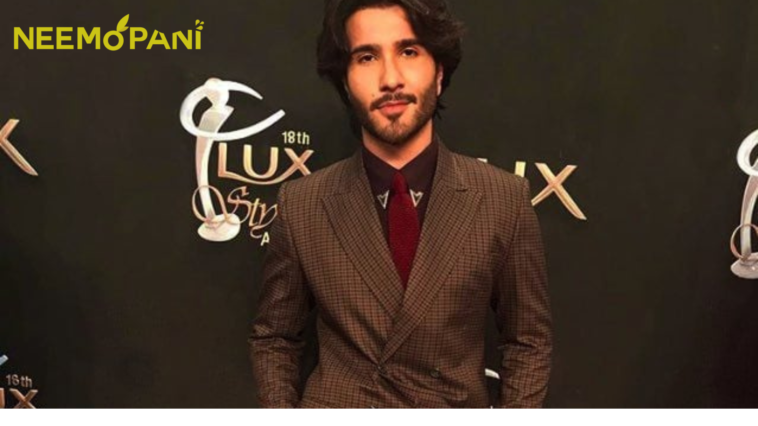 The renowned LUX Style Awards (LSAs) announced nominees for its 21st edition two days before the event, which was met with minimal fanfare. As soon as the names were revealed, spectators rushed to denounce what they saw as an injustice to other Pakistani artists and women. Feroze Khan, who recently came under criticism for alleged domestic violence against his ex-wife, Aliza Sultan, who gave proof of domestic violence on the internet, was nominated for Best TV Actor – Viewers’ Choice for his play Khuda Aur Mohabbat.

Many people remarked on the nominees revealed in a post shared across all LSA social media accounts. “Lux, do the right thing and quit praising abusers,” activist Usama Khilji commented. “Stand with abuse survivors.” “Stop supporting abusers and harassers and have some shame for God’s sake,” said influencer Naiha J. Eiman. “Expected better from you this time, but very disappointed and disgusted,” she continued.

Bilal Hassan, a well-known YouTuber, was among the first to inquire, “Can you explain why a domestic abuser is one of your nominees?” Our is really disheartening and demeaning to all of the women in this nation.” “Terrible of you Lux Style Awards to recognise and reward abusers and harassers,” Soul Sisters Pakistan founder Kanwal Ahmed remarked. That, too, as a brand that profits from selling soap to women! You should be ashamed.”

Several Instagram users reacted along the same lines. “You might have raised the bar here, showed some respect, maybe some guts.” In a country where the killers of Sarah and Noor have yet to face justice for domestic violence, you chose to nominate the most renowned (read: troubled) actor of his generation. “It just adds to the legitimacy of whatever transpired between them,” blogger Marium Hosein said. 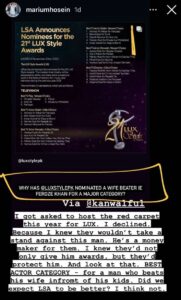 Sharmeen Obaid, The Saving Face director stated on her Instagram Stories, “Lux is a beauty company that sells soap to women, yet it has decided to allow the candidacy of a man known to have severely beaten his ex-wife.” Unilever, the corporation that owns it, has a global campaign that says no to domestic abuse and campaigns against it. “The corporation signed up to the UN’s SDGs, including SDG 5 on gender equality,” she said, noting that Unilever’s Pakistan headquarters do not appear to share the same ideals.” 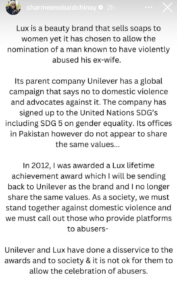 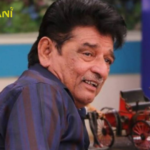 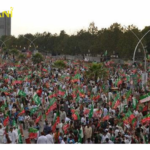